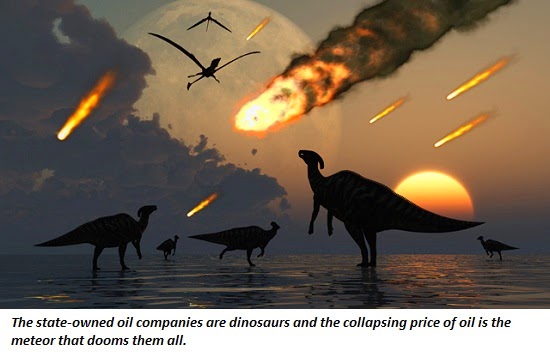 The problem isn't state-owned companies, the problem is state-owned companies run by corrupt governments and officials. Privatization has not benefited society in the long run. Resources are sold off well below their value, thousands of workers are fired, prices go up, efficiency goes down and there's less revenue for the government. The only people who really benefit are the wealthy.

The 'private' corporate giants are much larger, they may indeed being trying to destroy the state owned companies

Private enterprise is destroying the whole biosphere and this guy is singing its praises. There is no such thing as infinite growth on a finite planet. That is magical thinking. If humanity doesn't snap out of its delusion soon, all is lost.

We are now in the "Smash" phase of the plan.


In the "Grab" phase, all valuable and productive state assets all over the world will be "privatized".

I would highly recommend reading the Hirsch report from 2005. That transition needed to happen 20 years prior to peaking.

(Ironically, it came out the same year as the peaking of conventional oil production.)

State-owned oil companies that don’t slash expenses to align with revenues and boost critical investment in the infrastructure needed to maintain production will suffer financial extinction.

Domestic and international energy companies are responding to the 50% decline in the price of oil by doing what’s necessary to remain in business: they’re slashing payroll, postponing capital investments, delaying new projects and soliciting price cuts from suppliers and subcontractors.

We need to rethink state ownership. I find it difficult to believe that it is beyond the capacity of the human intellect to devise a system that is efficient and beneficial to the masses

This is the discipline of profit-driven capitalism: if expenses exceed revenues, profits vanish, losses pile up, capital contracts and eventually the company runs out of cash (and access to credit) and closes down.

Unfortunately for state-owned oil companies, the feedback of expenses, losses and access to credit are superceded by the need to feed hordes of parasites: the state-owned company exists not to generate profits but to fund large payrolls and support state officials and cronies.

Stripped of the discipline of markets and profits, state-oil companies exist to serve the interests of the state’s Elites and their cronies and favored constituents. As a result, critical infrastructure has fallen into obsolescence, capital investments have been hollowed out and the expertise needed to maintain production has eroded.

The state-owned oil companies are like dinosaurs: the extinction meteor of low oil prices has smashed their ecosystem, and all they can do is watch the sky darken as revenues crater and expenses and debt remain at unsustainably high levels

Case in point: the Brazilian state-run oil giant Petrobas is heavily in debt ($115 billion in 2013) and in danger of defaulting:

The firm has become one of the largest corporate borrowers in the world as it seeks to fund an investment program worth some $221 billion over the next five years, much of which is to develop huge oil fields that lie deep below Atlantic waters off the country’s southeast coastline.Brazilian state-run oil giant Petrobas faces threat of default on US$54 billion in debt:

Those efforts have turned Petrobras into the region’s most indebted company, with net debt of 268 billion Brazilian reais ($115 billion) at the end of 2013. That figure was 36% higher than at the end of 2012, in large part from depreciation of the Brazilian real against the dollar during 2013.
Brazil’s Petrobras May See Its Rating Downgraded

Moody’s Investors Service has placed Petrobras S.A.’s global foreign currency and local currency debt ratings on review for a possible downgrade. This would be the second time Petrobras’ debt ratings was downgraded by Moody’s after in October the oil giant’s debt ratings was downgraded from Baa1 to Baa2 stating that the company’s outlook remained negative.In March, before the corruption scandal broke, another risk ratings company, Standard & Poor’s cut Brazil’s debt rating to its lowest investment grade ‘due to the erosion of the country’s public accounts and slow economic growth.’

According to S&P the state-controlled oil company’s smaller projected liquidity and lower cash flow generation led to the downgrade.
Correspondent Mark G. explains the mechanics of the financial extinction process:

If Moody’s follows through then Petrobras will drop to Baa2, or two notches above junk. By the way, Rosneft is already at Baa2. And so is Lukoil. There are plenty of other Russian (and Brazilian) corporate debtors in this situation.

The question – which is almost completely political at this point – is what happens when Moody’s reduces its ratings on this BRICS paper to Ba1 and below where it belongs. i.e. Junkland.

1. There are plenty of US institutions that legally cannot hold this degraded paper in their portfolios after it drops to Ba1. Beginning with those perennial yield hogs, US based life insurance companies.

2. At this point hard-currency interest rates charged to the submerging market debtors will soar for rollover refinancing.

Thank you, Mark, for laying out the path to extinction. Hard-currency means the U.S. dollar (USD) in most cases, and as the currencies of oil exporting nations crater (see Russia, Nigeria, Brazil, et al.), the state-owned oil companies attempting to roll over debt or borrow enough to stave off insolvency are being hit with multiple meteors:declining currencies, ratings downgrades and plummeting revenues.

Companies that are being operated as going concerns are responding quickly and decisively to the meteor-strike of collapsing prices. State-owned oil companies that don’t slash expenses to align with revenues and boost critical investment in the infrastructure needed to maintain production will suffer financial extinction.

Posted by OURFUTURE at 9:54 AM